Browse: Home > > First Time for Everything!

First Time for Everything! 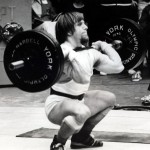 I always thought it was cool when I’d see people put stuff on weightlifting blogs.

Many of them are excellent writers and are often hilarious as well as highly informative.

There are several weightlifting web pages with blogs that I enjoy, and I can generally learn a little something from everybody.

I didn’t really seriously consider doing it myself until just recently, but a few people have told me they enjoy my writing and I figure it’s a good way to warm up for the eventual book.

In a sport with as much detail as weightlifting contains, there’s certainly no lack of topics to think up short blurbs for.

I hope that my website aids and abets the efforts of many up-and-coming lifters.

When this picture was taken in 1972, there was pretty much one source of information for young weightlifters everywhere. The mother of every young lifter spent plenty of time tidying up the several issues of Strength and Health magazine that were always strewn about the coffee table.

Lots of things have changed since then, but the law of gravity has remained exactly the same. Learning to defy it takes the same mental and physical effort that it always did, and there are no shortcuts.